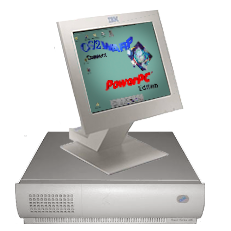 Released in 1994 (sometimes called the Power Series 400), the "Sandalfoot/Sandalbow" system was designed to be either a 'RS/6000' or 'Power Series' which was trying to accomplish the Workplace OS "one system to rule all of the OSes" (Windows, OS/2, AIX, Solaris etc). The RS/6000 was viewed by IBM as the high-end workstation side of things, and the Power Series was aimed at being more of a non-x86 PC replacement.

Due to its hybrid nature these systems can end up with varying firmware that renders its abilities to do different things. The original 6015 Sandalfoot had special separate firmware to boot and install the OS/2 PowerPC 1994 Beta 1 release (this is a different from the final non-beta release of OS/2 PowerPC that came to be for newer systems such as the PowerPC ThinkPad 850--however it was still so incomplete that it could have also been considered as a beta). The original RS/6000 7020-40P Sandalbow firmware allowed the machine to boot regular Open Firmware operating systems but DID NOT allow it to boot OS/2 PowerPC Beta 1.

Later on a more sophistocated 'roll up' of firmware (firmware version 1.29) incorporating both the 6015 and 7020 with additional features was released for both, I guess you could call it "Sandalfootbow" in that regard -- essentially allowing it to boot all of the PReP/CHRP/WorkplaceOS operating systems without needing one or the other. This probably adds more confusion to the whole ordeal: while both the Power Series 440 and RS/6000 7020-40P were *originally* separated by different firmware, the merged firmware removes this separation. I'm guessing it was due to causing so much confusion or made no sense, because it doesn't really.

The Power Series 440 is able to be upgraded from a PowerPC 601 to a PowerPC 604 with some extra FRUs (that are now long unobtanium).

Apparently when getting a replacement motherboard for the Power Series 440, it always had the RS/6000 7020-40P firmware. You would have to run the diskette (11H6105) and run the update utility from it to convert it to the Power Series 440 firmware mode manually. This diskette image is long forgotten and lost but it has been turned obsolete with the advent of the 1.29 firmware that rolls both into one.

Note: some of the files in the above archives are in UNIX dd format.

Before the OS/2 PowerPC final release came out (which was really more of a beta) there was the OS/2 PowerPC release (which was really more of an alpha) to select developers in confidentiality with some extra OS/2 PPC development tools. The OS/2 PPC Beta was *extremely limited* as to what hardware it supported as a result; one could say the final release of OS/2 PPC was limited but at least it ran on more than one system. 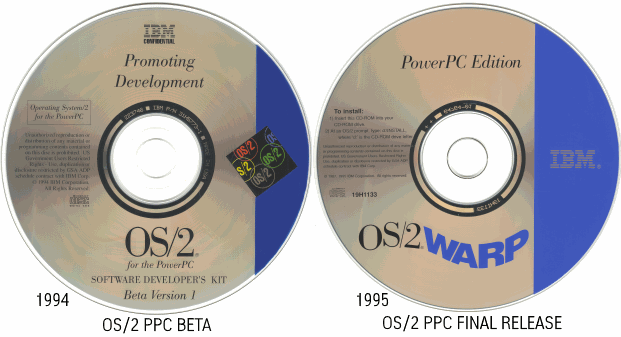 As previously mentioned, you will need the early 6015 Sandalfoot firmware or the 1.29 final "Sandalfootbow" hybrid release firmware that applied to both systems. Another requirement is the graphics card as it's expecting to see an S3 adapter (which *usually* the default for 6015, but for the 7020 it probably was not). The adapters IBM mentions are as follows:

If you attempt to boot the OS/2 PowerPC Beta with any other graphics adapter than the S3 models (864/928) you will get a black screen to nothing. Any S3 Vision 864/928 card will do. The Power GTX150P will only be functional under AIX.

I suppose one question to be asked is which came first: the RS/6000 7020-40P or the Power Series 440? It's likely that IBM was intending to release both systems in parallel (given the names sandalfoot and sandalbow), but it's most likely that the RS/6000 machine was designed first, and then the facy Power Series flip-over plastics were designed after. It's worth mentioning both the Power Series 440 and Power Series 600 have the same 'flip over' cover on the front to hide the CD bay and others when not in usage to make the front clean and minimalistic. 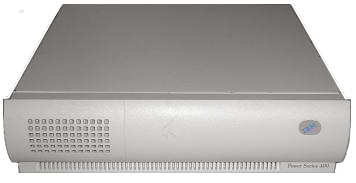 What's It Good For?

The main advantage of the Power Series 440 & RS/6000 7020-40P is that it can run the OS/2 PowerPC Beta whereas nothing else can. While it does have the capability of running AIX it's rather a bit slower and even other PReP OSes like Solaris 2.5.1 PPC run rather slowly. If you manage to find a Sandalfoot or Sandalbow with the PowerPC 604 upgrade then they become quite viable systems able to run a host of unique PReP/CHRP operating systems at a very nice speed. And because they have expansion slots you will be able to add cards that can (hopefully) work across all operating systems.

Here's a document from IBM on the firmware update procedure:

To update the flash on a system, follow these steps:
1. Boot the system without the SMS diskette in the drive.
2. Press the F4 key after the keyboard icon appears.
3. An animation asking for the SMS diskette will appear.
4. Enter the resident monitor by typing the password. The password has changed over different firmware levels. See the list of passwords below.
5. Insert the Firmware Image Diskette into the drive.
6. At the resident monitor A:> prompt, type the name of the firmware image file, such as P12H0456.IMG
7. This will "soft-load" the image into memory and reboot the system which should now be running the new firmware.
8. Follow steps 2-4 above to return to the resident monitor A:> prompt.
9. Verify that the new firmware is running by reading the version number from the colored bar at the top of the screen.
10. If the new firmware is running, continue, otherwise stop and try the soft-load procedure (above) again.
11. At the resident monitor A:> prompt, type "flash -a" and follow the prompts to update the flash.

The new revision number will appear on a banner at the top of the SMS and resident monitor display and in the VPD information.