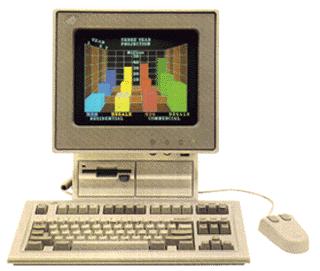 The IBM PS/2 Model 25 was released in 1987: its target market was geared towards schools and home users. This was especially signified by the use of ISA instead of MicroChannel: allowing existing home users to use their ISA cards without having to purchase new MicroChannel ones. These were the first IBM systems to feature PS/2 ports (labeled at the rear with '1' and ''2'), 3.5" diskette drives, a 15-pin video connector for MCGA (Model 30, internal connector on the 25 is still VGA compliant in pinout) and a Model M keyboard. The 84-key 'Space Saver' Model M was primarily marketed on this model, however most users didn't see the benefits of a smaller keyboard and opted for the 101 version with the numpad. These were innovations that were not yet present on the clone hardware, and many 486 clone boards retained the legacy 'AT' connectors instead of switching to PS/2 ports.

Coincidentally the clone manufacturers ("Gang of Nine") would replicate many aspects of IBM's next generation PS/2 platform despite heavily attacking MicroChannel: including the Model M 101 layout in various forms, PS/2 ports, 15-pin VGA, RS232 serial ports, and SIMMs (prior not many machines used the SIMM form factor). Eventually Microsoft took the Model M keyboard layout and modified it to 104 keys and introduced the 'Win Key' which became known as the crash key; but on IBM's original platform this was never an issue.

The all-in-one form factor was inspired from the competing Macintosh systems which came out in 1984; later IBM released successors to the Model 25 featuring a similar form factor but they were rarely sold outside of the education market making them harder to find. Unlike the macintosh systems the PS/2s were easy to open and perform maintenance on, and recessed screws have a cut-out so that a screwdriver can fit in those areas.

One unique aspect of the Model 25 (and 30) is that the external floppy drives actually have a BIOS extention and therefore work without any special drivers and are even boot-capable.

For all intents and purposes, the Model 30 is essentially the same as the Model 25, but in a different form factor with a different risercard.

This touch typing software came with Model 25s that were sold in a school environment (along with a slew of other educational diskette programs). I presume it was either sold to schools in a bundle deal, or sold as an option (not sure). The EduQuest division probably developed it.


If you have an 8086 Model 25, I would advise upgrading it with a NEC V30 & Intel 8086-2 Math Co-Processor. Try to find a Model 25 already configured with a HDD and populated with the maximum amount of memory-- as finding the proprietary HDDs and SIMMs is difficult. Another option is to buy an external disk for the system which IBM did offer as well. Unlike the Model 30 the Model 25 doesn't require a special HDD caddy, but it does have a special bracket on the floppy drive.

Since there are only two ISA bays to work with, you will have to decide between the following:
Sound Card, Hard Disk Drive controller (if the proprietary HDD needs to be replaced), VGA card (if you need to override the MCGA for better VGA support), Ethernet (if you don't feel like using parallel or serial).

Note: you can use a null modem with a serial or parallel port so you don't use one of the ISA slots up; but since I wasn't using the second slot with the old disk still chugging along, I have installed an ethernet adapter in mine.

The motherboard in the revision I have has three 22uF (226/25k) three legged tantalums, and six 10uF (106/16K) three legged tantalums. Positive polarity is the *middle pin*, outside pins are both negative I have since replaced them with electrolytic general purpose equivalents (Rubycon YXF series) at 50v tolerance to prolong the stability for the system. The upper CRT portion is held together with some screws that require a 'fork' bit to open.

Main motherboard top and bottom removed from the system. You'll notice the surface mount capacitors on the bottom of the board. PS/2s were quite ahead of their time and employed a fair amount of surface mount technology, despite of course still using through-hole.

I had a 3Com Etherlink III 3C509B-TPO on hand so that's what I decided to use (ISA NICs are fairly sought after now, especially for older 8-bit systems). There are a few caveats to running this card on an XT-class system even with a V30. The first being the native 3com drivers will demand a 286, and the second that I couldn't get the 3rd party Crynwr 3c509 package operating either. VCF user Nestor modified the Crynwr driver to make it compatible with XT-class machines so that needs to be used.

I've configured the 3com 3C509B on a socket 7 PRIOR to installing the PS/2 Model 25 -- and remember to set it as non-plug and play and optimized for DOS. The 3com detection utility *will not work* on the PS/2 Model 25 when ran, even after it has been configured. At least this is what I have found, since it is functioning conflict-free and the modified Crynwr driver does find the card as per above. 3com was never intending it to be ran on an 8086 that could be another factor.

For a quick test of something that uses networking, we can try IRCjr, I have the MTCP.CFG file located under C:\IRCJR so to set it, it would be: set mtcpfg=c:\ircjr\mtcp.cfg. Then you simply launch the DHCP tool to write the dynamic address and launch IRCJR with whatever you're connecting to, like irc.freenode.net.

Be Mindful of your IRQs

The IRQs that the 8086 Model 25 uses are based around the XT model since it is an XT system. Therefore for instance, the hard disk is on IRQ 5, which otherwise wouldn't be the case on later systems.

As it has been pointed out quite frequently, the 286 version of the PS/2 Model 25 is hard to find. But don't worry, if you have an 8086 Model 25 (preferably with the colour CRT), you can actually modify it with a Model 30-286 planar and use an upgrade adapter to get it 486 capable. There's a little known secret and that would be that both the PS/2 Model 25 and Model 30 share the same motherboard--at least it's so close in being identical that you can swap them with no issues. The reason IBM did this was to reduce R&D so a 'universal' board could be used for both. And that's why the PS/2 Model 30 uses a special breakout cable for the 15-pin DSUB since this connector is also used for the internal CRT on the Model 25.

There will be a few things to take note of when doing this conversion:
#1 The 286 PS/2 Model 25 and 30 both feature an additional 4 pin power connector to supply extra power to the 16-bit ISA bus. The 8086 machines do not have this extra power connector. Therefore you will either need to splice it in, or be content with your cards operating in an 8-bit mode.
#2 The risercard in the PS/2 Model 30 has an extra slot and is taller than what can be put in the PS/2 Model 25. Therefore you will either need the 25-286 riser card or heavily modify the 30-286 riser card so it fits in the smaller chassis. You CANNOT use the old 8-bit riser card that was present on the 8086 planar, it will simply cause the 30-286 board to not even power on.
#3 The 25-286 uses a special breakout adapter for the 1/4" TRS audio jack. You will need to get the FRU for this or recreate it if you want to redirect the PC Speaker audio to an external source.

With that out of the way you can get started. Possibly the best way to do this mod is to already have a PS/2 Model 30-286 that you don't care about and can use it for most of its parts. This is what we'll be using:
- The 30-286 motherboard
- The 1.44 FDD (if your Model 25 isn't already upgraded)
- The existing proprietary hard drive from the 30-286 (if your Model 25 doesn't have one or the existing one is dead)

The first thing you'll want to do is remove the 8086 motherboard from the PS/2 Model 25, then unscrew the four nuts near the serial and parallel ports and remove the special bracket used to hold the motherboard in the lowest slot. Screw on the special slot onto the 30-286 motherboard, install it into the 25 chassis and connect all appropriate peripherals. Then you'll need to modify the risercard to make it fit, you won't be able to use the old bracketing system either. Then it's just a matter of reassembling everything, the biggest challenge of the mod will be hacking the risercard. It is possible to buy a 25-286 risercard if you can find one available (64F0182).

Misinformation about the PS/2 Model 25

Due to the similar naming scheme, multiple models and general passage of time some misinformation has brewed over the years regarding the PS/2 Model 25. I hope to clear any of that up below.

The IBM PS/2s feature MicroChannel
Response: Certain models in the product lineup were built around ISA and not MCA, that includes: 25, 30, 33, 35.

The PS/2 Model 25 and 30 use ESDI hard disks
Response: Apparently they're not ESDI and some sort of direct-to-ISA bus kind of disks.