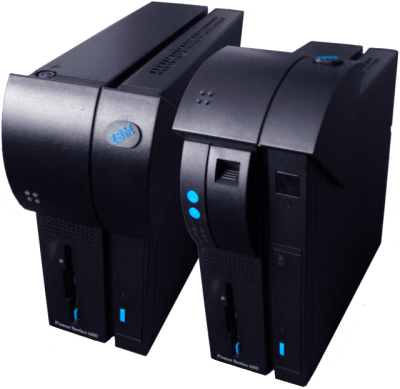 Released some time in 1995 (apparently mainly to developers), this system used a PowerPC 603 processor and an S3 86C928 on a proprietary daughter card. They were slated as the upcoming "Energy-Managed Workstation" which is why they are comprised of half laptop parts (ThinkPad RAM, ThinkPad drives, etc) in a very unusual chassis; and indeed their power requirements were pretty low considering how much a usual POWER/PowerPC system would take.

These were one of the workstations slated at IBM's big plan to create a unified PowerPC platform to run OSes seamlessly (OS/2, Windows, AIX, Solaris etc) under the "Workplace OS". Unfortunately the development costs were starting to mount extremely high and there was little commercial interest when the 'wintel' train had already largely taken off. A similar fate would be repeated when HP and Intel tried to make Itanium the next big thing. The PowerPC OS/2 initiative ended up depleting the majority of the OS/2 budget and Lou Gerstner had x86 OS/2 eventually terminated as a result.

Like all Power Series chassis it had a movable frontpiece to cover the front I/O when not in usage to preserve minimalism. There was not an RS/6000 equivalent of this machine produced to my knowledge; being built with highly specialized parts, however if there were I've wondered if its codename was "Marco". IBM was definitely doing something with the marco/polo nomenclature for this system, and we can see that reflected with the Power Series 440's sandalfoot/sandalbow.

Note: you must purchase a license from 4Front Technologies to activate OSS/AIX (while it's released as open source the old UNIX versions are not).

While the machine can be viewed as sort of 'unfinished' as it never managed to have a proper commercial release and its goal of achieving the 'WorkPlace OS' was never fulfilled, the system looks to be rather complete for what it is--they were clearly getting ready to sell the thing. IBM already had all of the injection molds created for its unorthodox front chassis, it was built of extreme quality and it otherwise would be mistaken for a production system. While there are some wires added after the fact due to PCB errors, it's not uncommon to see this even on production IBMs as the cost of redoing the board is less than adding a few tiny wires on manually.

Being a PReP machine it enjoys support from the following operating systems: