Released in 2001 and discontinued in 2003, the "IBM USB Space Saver Keyboard" fell under a rather generic name and often got conflated with other devices such as the UltraNav and earlier space saving keyboards. It's really a NetVista keyboard disguised as a Space Saver II, as such I tend to refer to at as the "NetVista Space Saver". It went (commonly) under these two part numbers: 22P5150 and 24P0340. Full chart from IBM's old site below:

It's not the greatest typing experience I've ever had (SK-8815 is better in my opinion), and the TrackPoint buttons are just a little bit too deep and stiff to be pleasant--however it's notable for two of its strangest features. It has a very long cable (so long it needs to be wound up on the included internal wire bind), and the TrackPoint mechanism is so tall that other caps stand out taller than any other device. 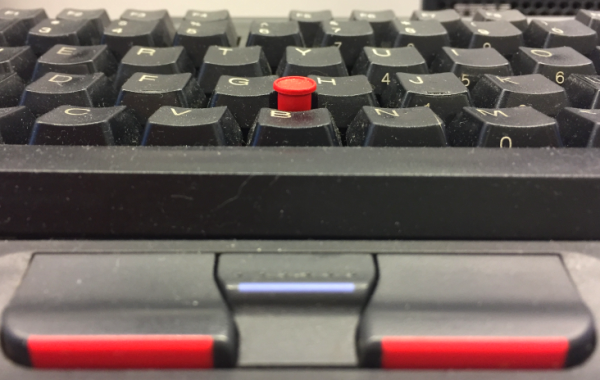 With that said, its TrackPoint buttons are rather stiff, and the lower-than-normal arrow keys can be slightly disorienting. They are still nonetheless sought after by some for the form factor and TrackPoint.